Chaco Canyon is the site of a spectacular grouping of ancient stone ruins in northwestern New Mexico. The canyon is bordered by rocky sandstone cliffs and cut by deep washes.

Officially known as Chaco Culture National Historical Park, it is thought to be the center of a civilization that flourished between the mid-800s and 1250 CE. During that time a series of massive “great houses” were constructed from stone. A great house consists of many rooms built in multiple stories, plus open plazas and round kivas.

The buildings were often oriented to solar and lunar events, with windows catching beams of light on the solstice and other important days. The  purpose of the houses is uncertain, but archeologists say that the lack of hearths and other signs of everyday living, may mean that Chaco was a ritual and ceremonial center for the ancestral puebloan people, also known as Anasazi.

Seashells, copper bells, and the remains of birds from Mexico, as well as pottery and turquoise brought from faraway places seem to indicate that Chaco was a center of trade or that people brought these items as ritual offerings.

Many modern Pueblo and Hopi people trace their ancestry to Chaco and the site is treated with respect for the past and still used for ritual purposes.

The ruins of several great houses are accessible around the loop drive in the park. Pueblo Bonito is among the largest and most completely excavated sites. It is estimated that this great house contained over 600 rooms and 40 kivas. A .75 mile trail takes visitors through the large plaza and down into the lower rooms of the great house. Archeologists believe that construction began on Pueblo Bonito in 850 and continued until 1150 CE. The walls are generally constructed with a core of sandstone and mortar and faced with distinctively shaped sandstone blocks. Pueblo Bonito is built against a massive cliff, part of which collapsed on the site in 1941.

There is evidence of a system of more than 400 miles of roads that connected Chaco to other outlier sites, including those such as Salmon and Aztec to the north. Salmon Ruins was built between 1088 and 1090 CE and occupied until 1280 CE. Archeologists say that the structures and artifacts show a clear relationship to Chaco. This site contained 150 rooms on the ground floor with many more on second stories and higher. There is an elevated kiva and another kiva built into the ground. These large round kivas were thought to be used for ceremonial purposes. By 1300 CE most of the people here and in Chaco had migrated south toward the Rio Grande valley or to other destinations.

To see more of Chaco Canyon, you can try one of the four backcountry hikes. A free permit is required, but it can be obtained at the trailhead.

The hike to Pueblo Alto is about 3.5 miles roundtrip and leads to two ruins high above the floor of Chaco Canyon. The trailhead is located at just over 6,000 feet and the hike climbs up 400 feet. Begin with a short walk along a road to the Kin Kletso ruin. This great house was built in two stages and had about 100 rooms and five enclosed kivas.

A climb up through an opening in the rock wall brings you to the cliff above the canyon. Walk a short distance along the cliff top to the overlook of Pueblo Bonito. One of the best ways to really understand the enormity of Pueblo Bonito is to see it from this overlook.

Proceed north from the overlook past stairs built by the Chacoans. Continue on across a rock bluff. To your left, there is a sign for New Alto. It was built about 1100 CE and it is estimated to have 58 rooms, but has not been excavated. Straight ahead is Pueblo Alto. There are dramatic views in all directions, including Mount Taylor to the south. The visible high points may have been used by the Chaco people as signalling stations, using fires or reflective surfaces made of gypsum crystals. The Great North Road extending 40 miles begins at Pueblo Alto. The remains of vast quantities of broken pottery have been found in excavations here, leading researchers to speculate that Pueblo Alto may have been a center for ceremonies involving the ritualized shattering of pottery. Allow at least three hours for the hike in order to spend time at the ruins and overlook.

Chaco Canyon is a high desert environment at over 6,000 feet and the weather can change quickly; there is always a chance of an afternoon storm. Currently, the days are warm, usually around 70 degrees and the nights cool near 30 degrees. For November, forecasted highs are in the 50s and lows in the 20s. The closest town to Chaco is Nageezi, if you want to check upcoming weather.

There is one campground located in Gallo Wash near the entrance to the park, one mile before the Visitor Center. The 49 spaces are located near a cliff that has ruins and petroglyphs. Advance reservations are recommended; call (877) 444-6777. There are bathroom facilities with non-drinkable water, although these are closed after Veterans Day. The closest food and other services are located on State Road 550 at Nageezi.

The most direct way to reach Chaco Canyon from Taos is to drive north from Taos Plaza four miles and turn left onto U.S. 64 toward the Rio Grande Gorge Bridge. Go past the bridge and turn left onto the West Rim Road. Drive just over eight miles and go right on State Road 567 through Carson. Turn left onto U.S. 285 and head south for 27 miles. Go right on U.S. 84 for 21 miles and then turn left on to State Road 96. After 49 miles, the road will end at U.S. 550. Turn right and go just over 44 miles to the entrance to Chaco on your left and follow the signs to the visitor center. The first part of the entry road is paved. It then turns to gravel. As you approach Chaco, the road is rough in places. The total distance from U.S. 550 is about 23 miles. Allow four hours for the trip; it is a total of approximately 195 miles.

Editor’s Note: Cindy Brown is the author of the “Taos Hiking Guide.” She will talk about Chaco Canyon hiking at Taos Mountain Outfitters on Friday, Nov. 13. Contact Cindy at cindybrowntaos2010@yahoo.com. 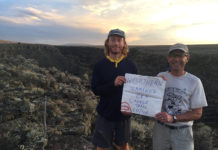 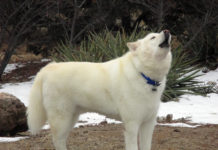 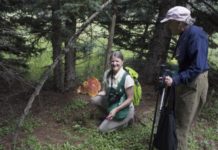