Editor’s note: The following is a reprint of an article by Lori Gallagher, sister of Chronicle founder Joe Gallagher, that first appeared in the July 27, 1978, Sangre de Cristo Chronicle. Other than a few notations it has not been edited in any way. 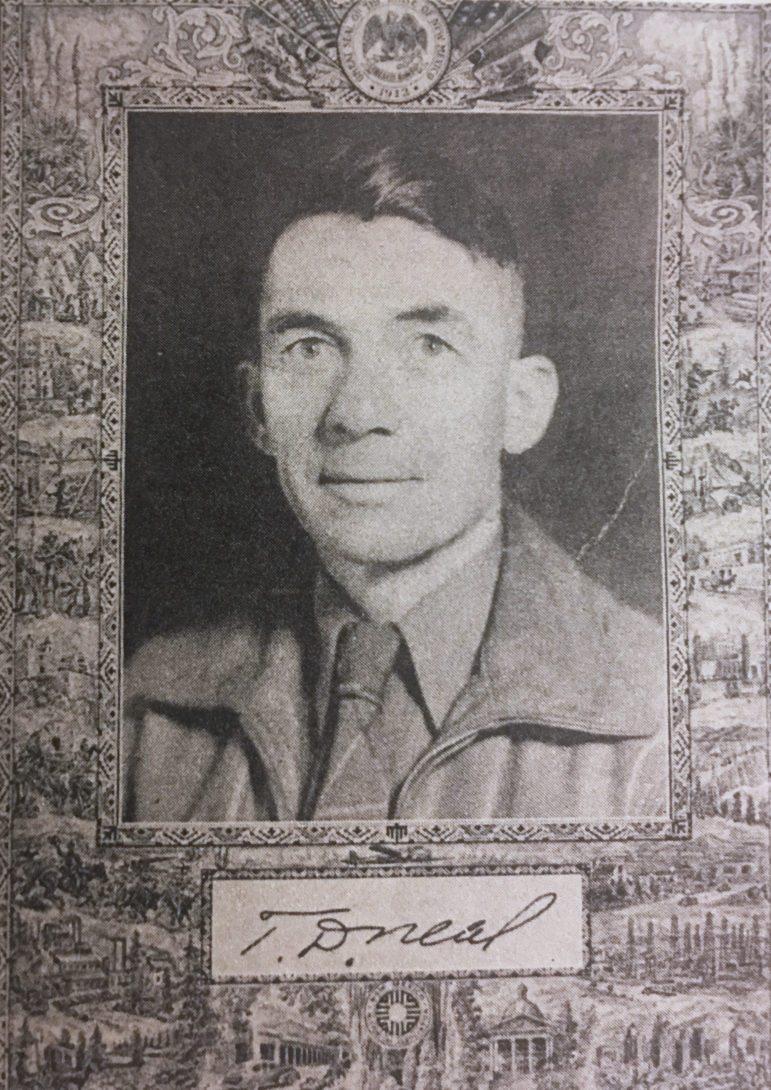 Although many great men have passed from us, and only the memories of their hopes and dreams linger today, their accomplishments remain as foundations for our lives. One of those great men was T.D. Neal [Talmage Dirk Neal], who is considered by many to be the founding father of Eagle Nest.

From listening to those who knew T.D., one soon realizes how his pioneer spirit and determination could charge an atmosphere with the enthusiasm to make his dreams come true.

Coming to New Mexico from Stroud, Oklahoma, around 1919, T.D. Neal, his foster father H.J. Johnson, and his brother Roy had the foresight to envision prosperity in the Moreno Valley. When they arrived, the only building in the area later known as Therma was the old “Beimer shack.” By the spring of 1920 [two years after the completion of Eagle Nest dam], the T.D. Neal Mercantile store was completed as the first large building and business operation on the corner of two acres of land.

As mining died out in Elizabethtown, T.D. and H.J. found their labor profitable when the area became increasingly popular as a haven for Texans seeking mountain retreats and recreation. As the word spread that Eagle Nest Lake boasted fine trout fishing, competition increased in town. In 1923 Earnest and Charlie Bukove build the Valley Garage where the Gold Pan stands today and the Valley Store on the south side of the road across from their garage. To keep in the running, T.D. enlarged his one-room store, and built a garage and the first cabins in town. When the population shifted from Elizabethtown, T.D. petitioned for a post office, which was granted and the town was named Therma after a relative of the postal inspector. Later as mail addressed to the “Eagle Nest Lake” flooded in, village residents decided to rename their town Eagle Nest.

T.D. was the kind of man who welcomed a challenge. Every business venture was filled with the thrill of turning nothing into something great. When T.D. and H.J. opened the store, T.D. bet his partner that they would gross $10,000 in the first year — and they did.

Besides the Eagle Nest business enterprises, T.D. later built a store at Agua Fria and a post office was installed there as well. H.J. and T.D. were also partners in the ownership of a store in Red River. Moreover, when T.D. arrived he platted the town and had it surveyed to better plan for the future. 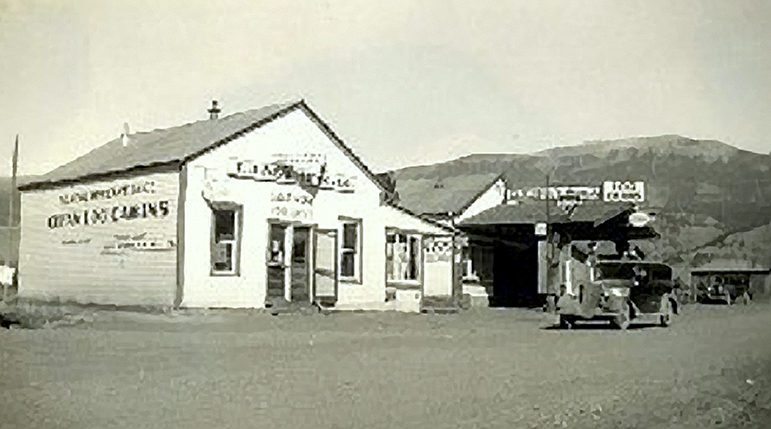 Profits increased and T.D. built his own home on the main street, the white and green-trimmed house that still stands across from the Laguna Vista Lodge. For his bride, T.D. took a valley beauty with long golden blonde hair, Maude Lowrey. Maude helped T.D. in the store and in the post office until their son Tal Jr. was born. Eight years later Maude died leaving T.D. and Tal to manage on their own. Maude’s sister Annie Haddow and her husband John moved down near the store to help out. In 1933 Annie received her bid for the position of postmistress, a post she held for 30 years.

To pass the time T.D. became involved in other areas of business. He acquired a 320-acre ranch at the head of Red River and started raising his own herd of Hereford cattle. T.D. had a fine strain of Herefords intermingled with short horn through the years and the brood cows proved to have a high milk capacity. On the long drives up from the winter pasture in Ute Park, the cows had to be tied to a tree and milked because the cows couldn’t take all the milk. Like everything tackled by T.D., he ranched with total involvement — big cattle drives, branding and shipping. T.D. will be remembered, especially by his son Tal, Bill Gallagher and an Indian named Victor Martinez, as saying, “We’ve got all day, boys, don’t rush ‘em. Let ‘em take their time!” much to the displeasure of T.D.’s accompanying cowboys who were anxious to get home.

Even though ranching may have been T.D.’s favorite activity, by the end of the day he was heard to remark, as they drove his cattle over McIvoy Hill and the moon was on the rise, “who the hell wants to be a cowboy?!”

While checking his cattle up in the high elevations of the Red River ranch, T.D. was known to carry his fly rod to dabble at one of his favorite sports, fishing. As an avid sportsman, T.D. also enjoyed hunting, which added a balance to his active life. The sport of fishing as well as the meal was enjoyed by T.D. as he began the first Eagle Nest Fish Fry., which was held in a lake pasture where the Moreno Valley Bank stands today. One of the biggest years for the event was 1936. Cars were lined up for miles from the Eagle Nest Lodge to the Cloverleaf Motel. T.D. contracted the catching fo fish iced down whole and supplied the wood, coffee and buns at no charge for 2,000 to 3,000 people. He wanted to see activity and bring people in to help Eagle Nest prosper.

T.D. also enjoyed social activities such as poker, horse racing and gambling when they were the name of the game in Eagle Nest. Gambling was at its peak in the mid and late ‘30s and, although it was illegal in New Mexico, the law was not enforced until the ‘40s. That period was called a time when “you did anything you were big enough to do.” The famous casinos such as that owned by “Dough-Belly” Price, El Monte Hotel owned by the Bukoves and the Eagle Nest Lodge owned by the Gants, featured roulette wheels, slot machines and big gambling tables. With the 1940s came the end of gambling when police were ordered to destroy all signs of gambling. Slot machines were hacked to pieces with axes in the street. This marked the end of major gambling in the area, although it’s been said some bootleg slot machines were still in use.

In 1949 T.D. increased his property when he bought an irrigated cotton farm in animas, New Mexico, which he planned to use as a winter home when he retired. From 1951 to 1953 T.D. and Tal Jr. obtained boat concessions for Eagle Nest Lake, which at that time were leased by the state after Salty Reed no longer managed the lake and the Game and Fish Department operated bank fishing.

In the summer of 1953 T.D. died of a massive stroke following a history of high blood pressure. Just days before his death, T.D. had ridden up to some of the high lakes near Wheeler Peak to check his cattle. Upon his return, he began to feel ill and left for Albuquerque to seek medical help. He never returned.

From those who knew T.D. there are varied descriptions of his personality. When it came to business, he was all business. But in the Depression years when times were rough for all, including T.D., he was good about giving credit to those who really needed it. T.D. has been described as a promoter, a money maker, a tireless go-getter, and a clever man with an eye for business. All his efforts were positive, directed to improving the community and his own interests. Tal remembers his father as banding together with other villagers for social affairs but in business it was “you leave me alone, I’ll leave you alone.”

T.D. organized a delegation to go to Santa Fe in order to route Highway 64 through Eagle Nest.

Although T.D. was a shrewd businessman, he met the public well. He was quite congenial and loved to tease the ladies and children. For those who frequented his store, memories of T.D. puffing on his pipe and playing checkers with Maude’s brother Willy are held by many. And let it be known that T.D. Neal gave [Joe Gallagher] the owner, editor and publisher of the Sangre de Cristo Chronicle his first pair of boots, which were worn to a frazzle before being given up.

T.D. was a small man in stature but a great man of vision, for he looked to the future with confidence. Today, Tal Jr. remarks, “Dad would be shocked to see how the valley as changed. Now I’m selling land in Angel Fire for $12,000 a half acre, which is the same land that in 1945, when the Maxwell Land Grant dispersed, he had the chance to buy for $12 an acre. But then it was ‘too damn high.’”

One thing Tal remembers most about his father was that, “Dad loved big family dinners. Nothing pleased him more than celebrating all holidays and reunions. He loved getting together with family and friends to share a good meal. I can still see him after dinner stretched out on the floor sound asleep.”

Tal reflects on his father and says, “He was never much of a talker but he was beautiful to get along with.” It may be that his lack of conversation gave T.D. more time to draw up mental plans for prosperity, improvement and community involvement. T.D. was not a quitter. If a job needed to be done, he did it. There was no waiting around to shift responsibility to someone else.

Looking back, T.D. deserves far more credit than perhaps he has received. He was the leading citizen who organized an unincorporated town to accommodate toursts and bring business interests into the area. His unending generosity of time, money and foresight combined to produce what is the center of each of our lives today: our world in this enchanted valley and how we live and get along together in it. T.D.’s zest for life was illustrated in his every attempt. We need to perpetuate that enthusiasm that founded Eagle Nest 59 years ago.

Thanks are in order to Tal Neal, Jr., Annie and John Haddow, and Mae, Ed and Bill Gallagher for the information given to me on T.D. Neal and the valley. 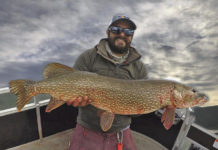