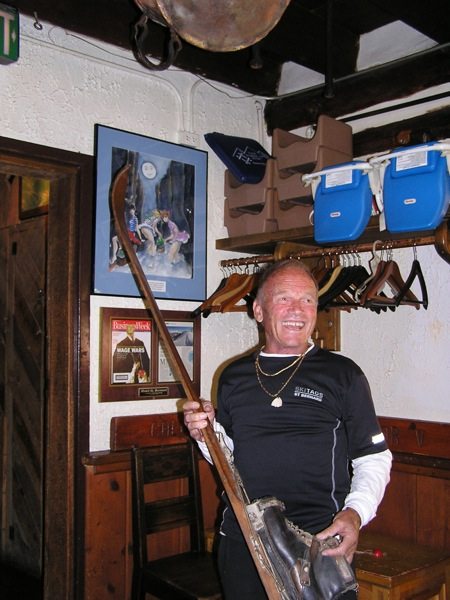 The sun was shining the day George Brooks interviewed Jean Mayer on the deck of the St. Bernard Hotel at Taos Ski Valley. Missing were the wafting aroma of hamburgers cooking on the outdoor grill and sundry revelers gathered to quaff well-deserved beers and watch skiers make their way down Al’s Run – some more successfully than others. On this day in early fall, the chairlift was open only for scenic rides and the colors were just beginning to turn.

Brooks, executive director of Ski New Mexico, had enlisted the help of videographers Tom Fairfield and Chris Boyden, owners of Hook’em Productions, to tape Mayer’s reminiscences for his induction into the New Mexico Ski Hall of Fame.

All three men share a deep love of skiing and their awe of Mayer is evident throughout the hour-plus long taping. At one point Mayer apologizes, “I ramble too much” but Tom quickly interjects, “I could sit here all day” and Chris adds, “ We could make a 2-hour movie.”

“This is funny to talk about this,” Mayer says, a little embarrassed by the attention. “After all, I’m still alive.” (The late Ernie Blake, Taos Ski Valley’s founder and Mayer’s former boss, was one of the first inductees in 2003.) “I don’t like to talk so much about what I’ve done in the past. I’m interested in what we can do still for skiing in New Mexico. It’s good, for example, that we offer snowboarding here.” (Taos, one of last “skiing only” holdouts, finally relented to market pressure and opened to snowboarding on March 19, 2008.)

Despite his protests, however, Mayer soon falls into a rhythm talking about the sport he has enjoyed for most of his 72 years. Mayer’s face bears the deep bronze weathering of someone who spends a lot of time in the sun, still he is fit and trim and sports an earring in one ear, making him look more like an athlete of, say, 50. Mayer still skis most every day in winter and also stays active with windsurfing, river surfing in the Rio Grande, marshal arts and tennis, among other activities. “We are lucky here in new Mexico. It’s easy to stay in shape.”

Born in 1935, Mayer grew up skiing in the French Alps and was a French Junior National Champion before landing a job leading the ski patrol for the U.S. Army’s 10th Mountain Division in Garmisch-Partenkirchen. In 1956, he guided refugees from Hungary and Czechoslovakia over the mountains to safety in Germany and Austria.

“The U.S. government wanted to give me a medal, I wanted to come to the U.S.,” Mayer says. Through National Ski Patrol veteran William Judd, Mayer received job offers from Blake and fellow ski pioneer Pete Seibert. Both were apparently attracted as much to Mayer’s skills as a restaurateur as his skiing – before his stint with the U.S. Army, Mayer had worked in the kitchen at the Hotel Pierre in New York City and had graduated from Cornell University’s School of Hotel Management.

History holds that Mayer chose Taos because Blake supposedly also offered the job to the Austrian Olympic medalist Christian Pravda. Mayer smiles and says, “I got interested because of the Cowboys and Indians.”

Blake promised adventure (and not much money and reportedly advised Mayer not to come) but Mayer, attracted by the adventure, came anyway. He recalls getting off the bus in the high desert town of Taos, seeing Taos Pueblo Indians wrapped in their blankets and thinking, “What have I got myself into?”

It was right before Christmas in 1957 and almost immediately Mayer was introduced to Ernie Blake’s legendary fierce spirit. Blake challenged Mayer to a dual slalom down Snakedance. “I thought it was going to be a friendly thing but I pushed off and I thought, ‘Damn, he’s trying to win!’ so then I went all out.”

By 1958, the rest of the Mayer family – Jean’s parents Charles and Nicole and his younger brother Dadou – had arrived to help Jean build the St. Bernard, its hand-hewn beams and hand-crafted copper top fireplace are still part of the historic lodge’s charm.

Today, the St. Bernard is part ski museum, part ski hall of fame – a living tribute to the sport of skiing, to Taos Ski Valley, to Blake and other ski pioneers and to the Mayers themselves. Many of the photos gracing its walls are of Mayer and brother Dadou and Jean drags out some of the vintage skis he himself has used through the years, including the original Head skis.

Best ski school in the country

Mayer has been technical director for the ski school since his arrival in 1957 and has been instrumental in making it one of the top-rated ski schools in the nation year after year. He himself has been named one of the Top 100 Ski Instructors of the U.S. and in 2002, he was named “Best Ski Guide” by Harper’s Magazine in Europe.

From the start Mayer introduced the ski week concept at Taos. “That’s what we were doing with the soldiers in Garmisch.”

From the start, Taos was a formidable mountain with a Poma lift heading straight up Al’s Run. “People would fall off and then they’d have to ski down Al’s Run.”

Small consolation since the only other way down at that time was on Snake Dance – another run so challenging Ernie was inspired to erect a sign stating “DON’T PANIC! You’re looking at only 1/30 of Taos Ski Valley. We have many easy runs too!”

In addition to helping expert skiers reach the next level through a week of instruction, Mayer, and brother Dadou have both coached the junior race team. Both also participated in the Southwest pro ski racing circuit.

“Only with the opportunity to ski with really good skiers do you improve,” Jean says. “I hope to ski better this winter than I did last year and better than I did 40 years ago when I was coaching you guys.”

Here Brooks, who honed his own skills as a youngster growing up in Taos, notes, “You’ve done some pretty crazy things. Tell us about the Taos Marathon.

“I got a World Record ’cause of the Poma Lift. I skied 63 runs on Snakedance.”

“Rumor has it you were in bed a few days after that,” Brooks says.

“That’s just a rumor,” Jean says, then adds, “What they don’t tell you is that I was not alone in bed!”

‘These are the things that matter’

After the laughter, Mayer admits the mountain had fewer skiers wearing longer gear so the bumps were not as large as today’s Mini Cooper-sized monoliths. “It’d be pretty difficult to do that right now.” 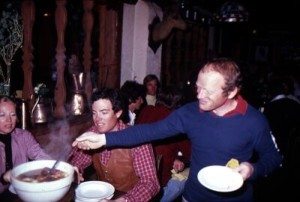 As much as Jean has shaped skiing on Taos’ mountain, he is equally proud of the way the St. Bernard defined Taos Ski Valley’s character with its European flavor and charm. “I make it a point to serve meals to all my guests. I figure I have served over 50,000. These are the things that matter to me.”

Asked about a typical day, Mayer says he’s at the hotel by 7:30 a.m. to serve breakfast before hitting the slopes with his class by 10. “I do teach skiing every day. I take the top class.”

Then Mayer serves his hotel guests lunch, clinics his instructors in the afternoon, serves dinner and by about 9:30 p.m., heads home. “I used to live here,” he says gesturing at a room just off the deck. 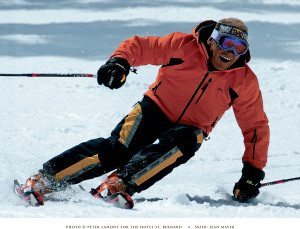 Of course he also explores the mountain. “There’s so much more terrain open now and a lot of it I would call extreme skiing. For a guy like me, I cannot perform anymore in racing but in extreme, yes.”

Referring to the trek skiers take to get to the top of Kachina peak, he says, “Hiking up to Kachina, you earn your run, you earn your reward. It’s not like buying a ticket for a ride at the fair. It’s the beauty, the weather.”

For Mayer, the St. Bernard and Taos legendary ski school are as important as the experience he, along with the Blake family, strive to maintain.

“I want to maintain the feeling and ambience of skiing the way it was. It’s more than the mountain, the snow and the skiing. It’s the spirit of skiing.” 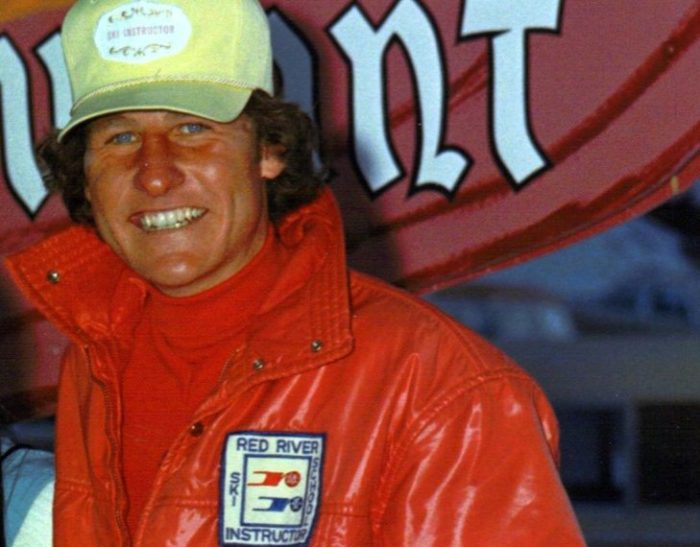 Drew Judycki:  Leaving a lasting legacy for skiers and boarders 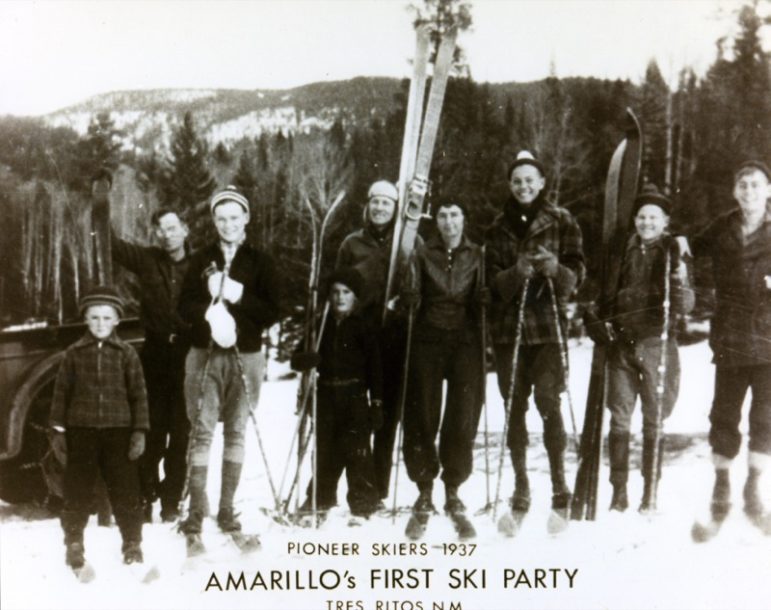