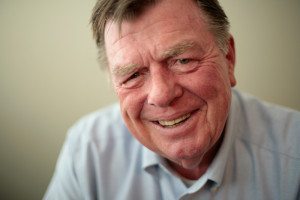 War correspondents are sometimes lost to history. Perhaps their name becomes nothing more than a forgotten byline on a forgotten news story. Perhaps, like so many of their brethren, they die alongside the soldiers whose stories they came to tell.

This is not the case with Joe Galloway, a journalist whose career spanned many decades — and several wars — before he retired from his last regular “beat” in 2010. Galloway, 72, is so well-known among veterans and others he is frequently asked to be a guest speaker at Memorial Day and Veterans Day Events nationwide. This year he will be keynote speaker during the annual Memorial Day Ceremony at Vietnam Veterans Memorial State Park, 11 a.m., Monday, May 26.

“I’m excited to see the memorial in Angel Fire and to see Angel Fire,” Galloway said during a recent telephone interview with the Sangre de Cristo Chronicle. “I’ve had many invitations over the years. This time I was determined to do it.”

For the uninitiated who may be wondering why a journalist is being tapped to speak to — and on behalf of — veterans, consider that Gen. H. Norman Schwarzkopf has called Galloway “the finest combat correspondent of our generation — a soldier’s reporter and a soldier’s friend.”

He is the only civilian to be awarded a Bronze Star by the Army for his actions rescuing wounded soldiers under fire in the Ia Drang Valley during the Vietnam War. War correspondents are there to be a witness, Galloway has said, but “there are some events that are so overwhelming that you cannot simply be a witness. You get caught in a situation where that’s not enough… you must stop and render aid.”

A native Texan, Galloway has often said he was inspired by the writings of Ernie Pyle, a Pulitzer Prize-winning journalist who was well-known for his columns during World War II and who was among a few civilians killed during the war to be awarded the Purple Heart.

“He captured the very heart of soldiers and what they do better than anybody I ever read,” Galloway said, adding, “I always knew if my generation had a war, I wanted to cover it and that’s what I tried to do in Vietnam.”

Asked if he saw Pyle (or himself) as heroic, Galloway replied, “War correspondents are not heroic. They’re there as witnesses. They’re there to tell the stories of the young men, and now women, who are sent off to do brave and terrible things.”

In his pursuit to emulate Pyle, Galloway eventually found himself in the thick of the Vietnam War, working alongside Army infantrymen and living among a motley crew of war correspondents who used to take bets on who would die first. “I never really expected to make it,” he said. “It’s always a surprise when I look in the mirror and see this old man looking back at me. A lot of my friends didn’t make it. That’s why wars are fought by young people. You’re 22, 23 years old, you think you’re bulletproof. You think you’re immortal. All those white crosses in national cemeteries would tell you otherwise.” 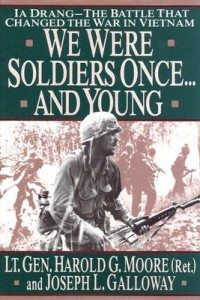 Still, Galloway said he never questioned what he had to do in Vietnam. “I didn’t go to cover 5 o’clock news conferences in Saigon. I went to cover soldiers, to see how they lived and how they died.”

Galloway also felt a responsibility to tell the truth to the people waiting back home, a view no doubt shaped by his own life. “I was born 3 weeks before Pearl Harbor so I didn’t meet my father ‘til age 5. Growing up, my first memories are of living in a house full of frightened women looking out the window for the telegraph boy.”

In co-writing “We Were Soldiers Once…and Young: Ia Drang – The Battle That Changed the War in Vietnam” with Lt. Gen. Harold G. Moore, Galloway told the Chronicle his goal was simply “to say ‘thank you’” to soldiers, especially those who may not have heard those words the first time they came home from Vietnam.

“That’s what I go (to Memorial Day services) for, to say ‘thank you’ and ‘welcome home.’” 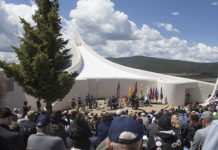 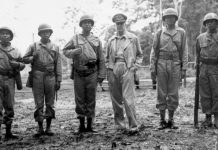