When the Sangre de Cristo Chronicle reported Oct. 20 that the Forest Service was closing the Old Red River Pass Road — Forest Road 488 — from its entrance at State Highway 578 to the top of the pass adjacent to the McShan and Flying Horse Ranches, a few readers expressed skepticism, noting they heard the same promise when the road to Middle Fork Lake was closed. One said the problems with Forest Road 488 were preventable.

“I have, for the past 10 years, been trying to get the Forest Service to do maintenance on it (all it needed to do was to divert the water off at the switchbacks),” Bruce McShan, owner of the ranch at the top of the pass wrote. “Now it will take some work to rebuild. I feel it will be a big loss to Red River area.”

And the closure has raised some deeper questions, mainly about what has happened to millions of dollars in a state fund derived from registration fees paid by off-highway vehicle owners – money that is supposed to be used to maintain trails they use.

Denise Ottaviano, Acting Public Affairs Officer for the Carson National Forest told The Chronicle in an email, “We do not have the resources or funding to be able to do the work right now considering winter weather is right around the corner. We are in the process of securing funding for the project and plan to complete the work in the late spring/early summer after the snow melts. The plan is to improve the entire road from where it meets the highway at the bottom all the way up to Bobcat Pass so it is brought up to a standard that can be sustained into the future.

“The road has been significantly damaged due to the heavy rainfall we received over the past several months,” Ottaviano continued. “The water is undercutting the road as it flows down the canyon. This has caused very unstable conditions including soft shoulders which could cause the soil to crumble and a vehicle could slide off the road. The road will require reconstruction to build up the areas that have washed away and we’ll need to replace the drain dips/culverts and ditches to provide a maintainable road prism and adequate drainage features.”

Some people who use the Old Pass road think there’s a public fund that could be used to fix the road – the state’s revenue from off-highway vehicle fees. After reading of the Old Pass closure, Chronicle reader Levi Curry asked on Facebook, “I pay a fee for a sticker and I don’t see them doing much… so what is annual fee for?”

Where are sticker fees going?

Off-highway vehicle owners in Red River and statewide pay registration fees. The State Game and Fish Department’s website notes, “New Mexico requires state residents to have a mandatory registration for all OHVs used on public lands, and the display of a validation decal. These fees, which range from $48 (for nonresidents) to $53 (for residents), last two years.

Henry Lewis, a local OHV tour operator told The Chronicle, “I register mine in Colorado. For one thing, it’s so easy and theirs is only $25 and you don’t have to have a title. I’ve got stuff from back in the ’90s that never even had a title. I can’t afford to buy new machines every year or two. I know for a fact that nearly everybody in this town buys theirs in Colorado. That’s where I got the information, from locals.”

Dirt-bike racer and Red River Realtor Rob Swan told The Chronicle, “I ended up on the committee to help draft the legislation. I helped write that law and that’s what it was designed to do, maintenance and building trails. Back when we could track where these purchases were coming from, Red River collected some 90 percent of these funds. What was happened is, the state has started raiding those funds.”

An investigation by The Chronicle revealed his question is a hot button issue for OHV advocates and users.

Mark Werkmeister, a member of the New Mexico Motorized Off-Highway Vehicle Association board of directors was more forceful. “The New Mexico State Legislature has raided the OHV Safety Fund (where the OHV registration fees go) multiple times: 2009 (line item vetoed by Richardson), 2011 ($750k) 2015 ($1 million in two separate bills, the Governor vetoed one so ‘only’ $500k was lost), and 2016 ($500k) and again in 2017 ($500k). In fact, the legislature has raided the fund to the point where the 2017 raid actually curtailed the OHV Education program run by the state. Now that they have effectively drained the fund dry, we received word two weeks ago that the Legislative Finance Committee is proposing legislation to raise the OHV registration fees. I guess they feel that they can raise the OHV registration fees so they have more money to steal.”

The Chronicle corroborated Werkmeister’s claims finding several instances in which trail funds (typically $500,000) were transferred to New Mexico State Parks (in funding bills like HB 2 earlier this year). Additionally, in reviewing minutes from New Mexico Off-Highway Motor Vehicle Advisory Board meetings for the past few years, The Chronicle found board members Rick Alcon, John Diamond, Stephen Henry, John Montjoy, Gerald Chacon, Paul Daly and Randy Jones were growing increasing frustrated with what they characterized as the “raiding” of trail funds.

In draft minutes from the June 21, 2017, meeting, Matt Seidel, OHV Program Manager, noted, “House Bill 2 the general appropriations bill took 500k from the trail safety fund [for New Mexico State Parks]” and “the special session last year of October took $300,000 from the trail safety fund as well…. We didn’t advertise for grants for FY18. Come July 1… it looks like the trail safety fund… is going to be close to zero.… We ended up having to cancel seven public and instructor classes.… We had to put a freeze on stuff just because they kept on raiding the fund and dwindled it so down….”

Lance Cherry, the Game and Fish Department’s chief information officer, told the board the fund takes in roughly $1 million every year “give or take 100,000.… I looked at about a 7-year period and that was the average.”

Asked by John Diamond, “Is it not protected?” Cherry replied his department had no control over use of trail funds. “That is at the hands of our lawmakers. And particularly a lot of those decisions are made with the legislative finance committee. I don’t really know what to tell you other than it would seem to me that it would be up to the industry and the users and the payers of those registration fees to lobby and pursue the protection of those funds. They are the ones who can persuade their lawmakers to make decisions that expend that money where it was intended….”

In the Aug. 10, 2016 minutes, Alcon, who chairs the board and who owns R&S Power Sports with several stores in Albuquerque, said “the raid of the fund…. is not palatable to the user group who fund us all, fund this program, created this program, make the program and drive it.… When we first started this program, a big part of this program was we need to drive registrations up by the users. And the vast majority of the OHV users I would say, the vast, vast majority have complied because they want to, or they are willing to. And, so, to misrepresent, misuse funds that they’ve entrusted this program with, I believe, first of all, is and I will go on the record, completely illegal. I believe that the state should be sued over it. I think it is a violation of their own rules and legislative statutes.” 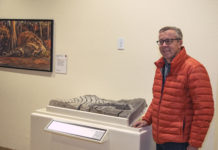