Music From Angel Fire Board President Judie Hass is excited about the festival’s 35th Anniversary Season Aug. 17 through Sept. 1.

“This year’s Festival celebrates 35 wonderful years of superlative chamber music performances under the direction of the quintessential violinist, violist and pedagogue Ida Kavafian. Ida’s leadership and vision continue to lead us in fabulous directions with unparalleled concerts featuring many of today’s most sought after artists, as well as in-school Young Artist performances featuring young artists from the Curtis Institute of Music in Philadelphia,” Hass said.

Kavafian enters her 35th year as artistic director of Music from Angel Fire, the renowned chamber music festival in New Mexico. Her close association with The Curtis Institute in Philadelphia continues with her large and superb class of talented students, the recent endowment of her faculty chair by Curtis Board President Baroness Nina von Maltzahn, and the awarding of the Lindback Foundation Award for Distinguished Teaching, which is presented in recognition of outstanding service in stimulating and guiding Curtis students.

In addition to her solo engagements, she continues to perform with her piano quartet, OPUS ONE, and her most recent ensemble, Trio Valtorna. Co-founder of those ensembles as well as Tashi and the Bravo! Vail Valley Music Festival (which she ran for ten years), she has toured and recorded with the Guarneri, Orion, Shanghai, and American string quartets; as a member of the Beaux Arts Trio for six years; and with such artists as Chick Corea, Mark O’Connor, and Wynton Marsalis.

A graduate of The Juilliard School, where she studied with Oscar Shumsky, she was presented in her debut by Young Concert Artists. In addition to Curtis, she teaches at The Juilliard School and the Bard College Conservatory. Ms. Kavafian and her husband, violist Steven Tenenbom, have also found success outside of music in the breeding, training, and showing of champion Vizsla dogs, including the 2003 Number One Vizsla All Systems in the US and the 2007 National Champion. She has performed with the Chamber Music Society since 1972.

“Mozart and Music From Angel Fire have many things in common,” said Kavafian. “One in particular is 35 years of great chamber music! Our celebratory 2018 season will honor our Opus 35 with an in depth look at arguably one of the greatest composers in history, Wolfgang Amadeus Mozart, who lived to just that age, 35. There is no more sublime chamber music composer to feature, and who doesn’t like Mozart?  Our Church series offers the complete Viola Quintets, coupled with Fanfares commissioned by and written for MFAF’s 20th Anniversary in 2003 by previous Composers-in-Residence.

“Speaking of which, this year’s composer is the creative and brilliant Andrea Clearfield, with a World Premiere planned for August 22.  The Young Artists, comprised exclusively of The Curtis Institute’s brilliant students, will perform throughout the series and in extensive outreach.  Other highlights not to be missed are the artistry and humanity of the amazing Native American Flutist, Robert Mirabal, who performs Opening Weekend in both Angel Fire and Taos, as well as a celebration of the 100th Anniversary of the birth of Leonard Bernstein on his exact birthdate.  All of this takes place in various gorgeous settings in Northern NM, with an informal and fun style that has become a hallmark of MFAF, performed by the leading musicians of today and tomorrow.  Come celebrate with us!”

“Our opening night, Aug. 17, takes place this year in Taos and features one of New Mexico’s greatest treasures – the marvelous Robert Mirabal,” said Kavafian. “He has some wonderful surprises in store for us!  The first half of the concert includes our 2018 theme composer, Mozart, in three sets of stellar duos for various instruments. Our opening night in Angel Fire will also feature the incredible miracle of music and humanity of Robert Mirabal, in a set comprising of his own special programming.  The 2018 Composer-in-Residence Andrea Clearfield’s Compass Kaleidoscope will be performed by the stars of tomorrow, the MFAF Young Artist Woodwind Ensemble, The Triacanthos Quintet. Mozart, our 2018 theme composer, will be represented by one of his great works for Piano Trio,” said Kavafian.

In addition to its main stage chamber music concert series, three Young Artist ensembles from the Curtis Institute of Music will perform in-school concerts throughout northern New Mexico during the Festival in remote rural locations from Dixon to Questa to Mora. The programs are often the first introduction to classical music for northern New Mexico youth.

Music From Angel Fire is funded in part by the New Mexico Arts Commission, the National Endowment for the Arts, the City of Taos Lodger’s Fund along with hundreds of citizens and local and regional businesses in support of its mission to share the experience of chamber music throughout northern New Mexico by presenting intimate performances and educational outreach activities by exceptional young artists and world class musicians. For more information visit www.MusicFromAngelFire.org or call 575.377.3233.

The festival website notes, “We will also bring other things 35 to you, such as important works that were written when Bach, Beethoven, Brahms and other great composers were 35. The amazing  Andrea Clearfield will be our 2018 Composer-in-Residence.”

“Mozart Two by Two and the Marvelous Mirabal,” 7 p.m. Friday (Aug. 17) at Taos Center for the Arts, will open with three sets of stellar duos for various instruments by Mozart, this year’s 2018 theme composer.

Then, following an intermission, Mirabal, will again stun Music From Angel Fire crowds as he joins classical chamber musicians with his Native American flutes. Mirabel last played with festival musicians in 2009.

Mirabal returns for the Angel Fire opening concert in a program titled “The Miracle of Mirabal,” 7 p.m., Saturday (Aug. 18) at the Angel Fire Community Center.

The 2018 Composer-in-Residence Andrea Clearfield’s “Compass Kaleidoscope” will be performed by the Music From Angel Fire Young Artist Woodwind Ensemble, the Triacanthos Quintet. The concert also features one of Mozart’s great works for piano trio. 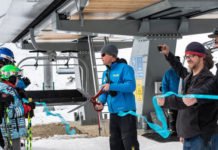